City Voices: A Book of Monologues by Toronto Artists

Hey, actors!  Looking for a topical audition monologue?  Check out City Voices: A Book of Monologues by Toronto Artists.    Here’s some info borrowed from their press release.  City Voices is a brand-new anthology of theatrical monologues, spoken word, poetry and prose all written by Toronto writers, reflecting life in Toronto at this moment in its history. 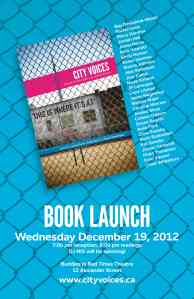 The idea for City Voices came out of a desire to not only stand up and show this government the strength of the arts community in this city, but also to create a forum with which fellow artists could showcase their work.  City Voices is a completely grassroots initiative that is being self-published by its editors (emerging writers Jenna Harris, Anila Pant and Ronit Rubinstein) as a reaction to our local government’s less-than-arts-friendly approach to governance and its overall lack of support for the arts.

The pieces in the book were selected from an open call put out this past April. City Voices boasts some of this city’s fiercest up-and-coming and established playwrights including Jordan Tannahill, Jessica Moss, Marcia Johnson, Kate Hewlett, Jordan Hall, and the 2012 Fringe Festival’s Play Competition winner Kat Sandler [Bloggergal’s entirely personal-opinion note:  I don’t know Sandler, but her 2012 Fringe play Help Yourself – featuring Daniel Pagett, who’s also a contributor to City Voices – was absolutely stunning!], as well as poets, spoken word artists and writing enthusiasts. The writers whose voices grace the pages of this book come from diverse backgrounds and range in age from 13 to well into their golden years.

Of special interest to Alumnae Theatre audiences are the contributions by Stacy Gardner (writer of Worms For Sale in Alumnae’s New Ideas Festival 2012); Neale Kimmel (writer of Frances and Marybeth – NIF 2011 & Factory Theatre 2012); JP Laroque (writer of Mythmaking – NIF 2011); Carol Libman (writer of A Very Different Place – NIF 2010); Jason Maghanoy (who directed Judith Thompson’s Palace of the End here in 2009); and Chloë Whitehorn, whose piece The Deepest Trench will premiere at NIF 2013 in March.

“It’s been inspiring to see the wealth of talent Toronto has to offer, and to be exposed to work by emerging artists who will no doubt one day be the major figures in Canadian theatre,” says Rubinstein. “To see all these amazing writers come together has been incredible,” echoes Pant. “The experience of sharing in their bubbling originality has nourished my own creativity and fuelled my imagination.”

The support that this project has already garnered from not only the arts community, but the community at large, has overwhelmed the three editors, including receiving a foreword from one of this city’s biggest proponent of its arts, Olivia Chow, MP Trinity-Spadina.

Please join us as we celebrate the launch of this fantastic book!

The book launch will be at Buddies in Bad Times Theatre (12 Alexander St.) on December 19.  Reception at 7pm; readings at 8pm.  Visit for www.cityvoices.ca more info.