TOP GIRLS: “The Pope Is A Woman” (Pope Joan)

British playwright Caryl Churchill’s award-winning Top Girls (written in 1982) has appeared on the Alumnae Theatre stage before: in our 3rd floor Studio space in 1996.

The new production, directed by Alysa Golden, will run on the Mainstage from January 18 – February 2, 2019.  Tickets available at https://www.alumnaetheatre.com/tickets.html

The play begins with the main character, Marlene, hosting an imaginary (?) dinner party to celebrate her promotion at work.  Her guests are five famously strong women from history – some real, some legendary.

Alumnae Theatre Company member Diane Forrest, a writer and editor, has profiled the guests who appear in the play – here’s her first blog entry.

THE POPE IS A WOMAN!

“Fake News,” Trump would say, and for once he’d be right. The woman who became Pope was one of the favourite conspiracy theories of the Middle Ages. The story goes that Joan, born in Germany of English parents, first dressed as a man to accompany her lover to Athens, where she became so admired for her learning that she eventually rose to be Pope. After two years of glory, however, she blew her cover by giving birth during a papal procession. As a result, she died in childbirth/was murdered by the mob/was locked up in a convent, depending which story you favour.

The legend of Pope Joan first showed up in various writings in the 13th century, and was widely believed for centuries. Joan showed up in medieval and renaissance art and writing. Meanwhile, rumour had it that the reason new popes sat in a chair with a hole in the seat was so officials could check that they had the right equipment to be pope. And the Pope always avoided a certain Roman street because that was where Joan had supposedly given birth.

In 1601, Pope Clement VIII delivered a major blow, declaring Pope Joan fake, and historians proceeded to deconstruct the legend. It persisted, however, partly because anti-Catholic propagandists found it so useful, partly because, well, it was just too good a story to give up.

Today, the legend is generally assumed to be false. Intriguingly, however, a professor from Flinders University in Adelaide recently discovered two coins from the 850s, bearing the monogram of “Johannes Anglicus” – supposedly Joan’s name as pope. Others have suggested these are medieval forgeries, designed to capitalize on the popularity of the Joan story. 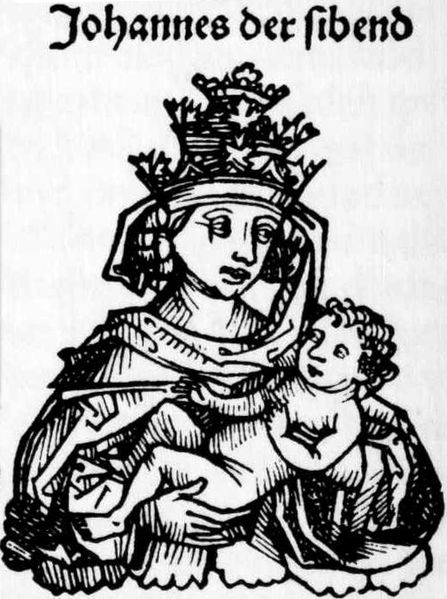