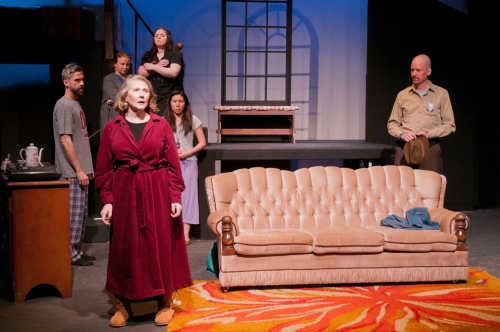 Alumnae Theatre Company cordially invites you to attend a family gathering at the home of Beverly and Violet Weston in Pawhuska, Oklahoma.

Alumnae opened its production of Tracy Letts’ August: Osage County on the mainstage last night. Directed by Victoria Shepherd and featuring a talented ensemble, this is family dysfunction at its grittiest, no holds barred best.

When the Weston family patriarch (Thomas Gough) goes missing, middle daughter Ivy (Andrea Lyons) – the only child who stayed in town – rallies the family around her ailing mother Violet (Marie Carriere Gleason). Violet’s sister Mattie Fae (Carol McLennan) and husband Charlie (Rob Candy) are the first to arrive, and we get a sense of the estrangement that underpins the family dynamic. The Weston’s oldest daughter Barbara (Kelly-Marie Murtha) is the…

Anyone fancy a little play reading over the holidays? You might want to slot that in, because auditions for the final production in Alumnae Theatre Company’s season, August: Osage County, take place January 17 – 19!

Alumnae Theatre Company’s production (April 8 – 23, 2016) will be directed by Victoria Shepherd, who has helmed many shorts in Alumnae’s Big Ideas and New Ideas, as well as Tennessee Williams’ Summer and Smoke on the mainstage. Other favourite directing credits are the Titanic-themed drama Scotland Road (for Amicus Productions) and the charming, based-on-a-true-Canadian-story Queen Mili of Galt (for Village Playhouse).

When the family patriarch vanishes, the Westons return to rural Oklahoma to care for their afflicted, manipulative mother.  Winner of the 2008 Pulitzer Prize, Tracy Letts’ darkly comic drama is a harrowing epic that puts the “fun” in “dysfunctional”.

TO BOOK AN AUDITION TIME
Please e-mail augustauditionsATC@gmail.com or leave a message on the audition line at 416-364-4170 ext 3.
Auditions will be held at the Alumnae Theatre, 70 Berkeley Street (SW corner of Berkeley and Adelaide)

The Alumnae Theatre Company encourages diversity in its membership and casting. Please note this is a non-paying engagement.